CBD for Crohn’s Disease: How to Improve Inflammation

With the rise of relaxation on laws regarding marijuana and its growing popularity, the CBD industry has managed to come into the spotlight as well. Unlike THC, CBD is not a psychoactive cannabinoid. According to users and customers, they provide benefits that allow the user to deal with health problems without having to go through the high that one experiences when they smoke or ingest THC.

These benefits have contributed to its ever-increasing user base and have helped it maintain a foothold in the medical community for those who prefer alternative medicine.

In this article, we will talk about CBD can help with Crohn’s disease and might be able to help those afflicted with this disease lessen the severity of their symptoms. 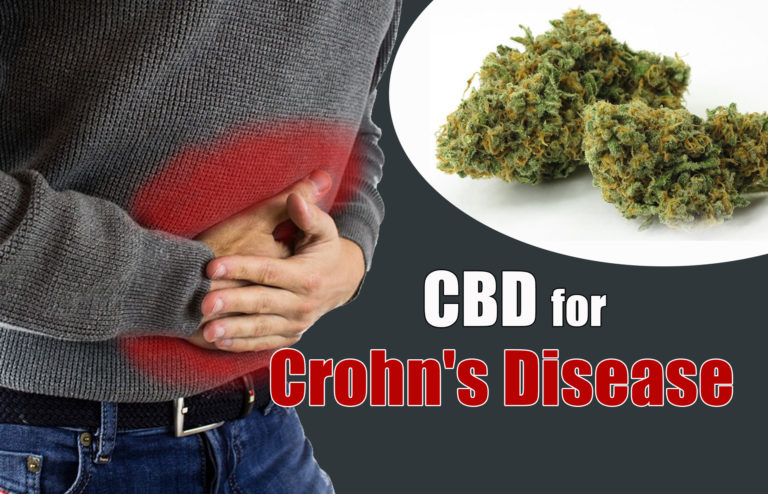 WHAT IS CROHN’S DISEASE?

Symptoms associated with this disease include weight loss, pain in the abdominal area and tenderness, weight loss despite eating, feeling as though your abdomen is full or as though something is in there, chronic diarrhea that may contain blood or pus, and rectal bleeding to name a few. Crohns Disease may give you similar symptoms to Irritable Bowel Syndrome.

In addition to the local problems that one may experience from Crohn’s disease such as abscesses and strictures, Crohn’s disease also has the potential to affect other parts of the body such as the skin, the bones, and the kidneys. Overall, Crohn’s disease is a very serious disease that impacts the entire body.

What Does Research Say?

The biggest issue potential users have with using CBD to treat some of the symptoms of their Crohn’s disease is that there is not a large body of research backing the use of CBD in Crohn’s disease treatment. Most of the research that has been provided for Crohn’s disease and the effects of cannabinoids have only been geared towards cannabis and THC. This is due to having known more about the medical uses of cannabis for different ailments before CBD grew popular.

That being said, there are studies emerging that do indicate CBD’s helpfulness in alleviating the severity of Crohn’s disease symptoms, despite there not being extensive research conducted on the process. There are also studies that have noted potential side effects such as diarrhea or changes in appetite, which can both serve to worsen the current symptoms of Crohn’s disease. Make sure to speak with your primary care physician to talk about these issues before adding CBD to your treatment plan. We’ll discuss more about how and why CBD works to reduce the impact of Crohn’s disease in the next section.

How does CBD help with Crohn’s Disease?

CBD is an extremely versatile cannabinoid. Unlike THC, which does work throughout the system to alleviate pain, CBD does not heavily target the receptors located throughout the brain. This means that the effects of CBD are focused more on the body to provide relief for a variety of different problems. In regards to Crohn’s disease, here are some ways in which CBD can help those dealing with this disease.

One of CBD’s most well-known qualities is its anti-inflammatory properties. Because Crohn’s disease is an illness that causes inflammation in the digestive tract, CBD helps to reduce this inflammation. This reduces the overall severity of the symptoms caused by the disease.

Along with reducing inflammation, CBD is also well-known for being an analgesic or a pain reliever. You may already know about the pain relief that one experiences when smoking or ingesting medical marijuana. CBD provides a similar experience in terms of pain relief but doesn’t make you tired or make you feel the way that THC does, giving you the ability to reduce pain without putting you out of commission. For those who have intense pain or just a simple nagging one that makes it difficult to function, CBD will work through your system to reduce the overall pain you feel and help you get back into your life.

Unfortunately, one of the symptoms of Crohn’s disease is vomiting and nausea. Even if this isn’t one of the most prominent symptoms in your own experience, you may have to take a medication that does have nausea listed as a side-effect. The solution? Using CBD will help to tackle these issues as CBD studies shows it can help to relieve nausea. If you find yourself feeling like vomiting or actually vomiting quite a bit, CBD can possibly make it so that you don’t have to deal with these symptoms or will help you reduce them so that you do not experience them quite as frequently as you do in the present.

While diarrhea isn’t typically something that healthy people are concerned about, diarrhea is a very dangerous symptom for those with Crohn’s disease. Besides the dehydration that can occur when one is experiencing diarrhea, you are also not soaking up the nutrients of your food. This means that you will consistently be losing weight and becoming more unhealthy as the diarrhea continues.

Fortunately, CBD has been shown to have anti-motility effects, especially for those who are dealing with a disease such as Crohn’s disease. That being said, we did state above that it could potentially cause or worsen diarrhea and it is important to approach CBD carefully when using it for this symptom.

How Does the Endocannabinoid System Affect It?

The endocannabinoid system is a complex, natural system contained within the human body that is designed to regulate all of the body’s processes back to homeostasis.

To begin, let’s discuss the system itself. The endocannabinoid system consists of receptors contained all throughout the body. The body contains two receptors, known as CB1 receptors, which are located mostly throughout the brain. There is also the CB2 receptors, which are largely located throughout areas such as the central nervous system and the digestive system. In order to regulate processes such as temperature and pain, the body releases endocannabinoids that attach to these receptors to produce certain effects.

The problem for those who have Crohn’s disease is that they do not have endocannabinoid systems that are regulating pain and inflammation as well as they should be. That contributes to the issues that those with the disease are experiencing. Since the body can’t regulate those processes in the way that they need to, the pain and inflammation go unchallenged until a medication or another type of chemical is introduced.

To combat this issue, we introduce phytocannabinoids, which are cannabinoids that are found in plant material. These types of phytocannabinoids include THC and CBD. THC, when introduced to the body, targets the CB1 receptors more than the CB2 receptors. This is why THC is known for its heavily psychoactive properties. CBD, on the other hand, targets the CB2 receptors. This helps users to feel less pain and inflammation, which is why CBD is such a helpful pain reliever and anti-inflammatory substance for those suffering from Crohn’s disease.

Overall, the main reason for reading this article is to get a clear answer on whether or not CBD is helpful for those who are dealing with Crohn’s disease. To summarize the information above, CBD is a helpful way to alleviate the severity of symptoms associated with Crohn’s disease. Besides easing pain and calming down inflammation that is occurring in the digestive tract, CBD works in a number of other ways to combat some of the symptoms that come along with the disease or the symptoms that occur as a side effect of medications designed to treat the disease.

Although CBD can certainly be helpful in making Crohn’s disease more bearable, it is extremely important that you reach out to your doctor or a specialist before adding CBD to your daily routine. This will prevent you from potentially worsening your condition or from negating any medications that your doctor has already prescribed.