CBD for ADHD: How it Can Help

People suffer from Attention Deficit Hyperactivity Disorder (ADHD). It can make life very difficult. Those who do not suffer from this debilitating condition have no understanding of what it is like to live with ADHD.

In addition, they often have very little tolerance for those that do suffer from ADHD because there are no obvious physical symptoms. Patients who suffer from it are often characterized as undisciplined and unreliable due to the difficulties that they experience with focus, attention span, or concentration.

Consequently, for someone with ADHD, simply getting through a single day often requires a monumental amount of effort! Fortunately, many of our customer testimonials and reports from various CBD users have said that cannabidiol has shown to help them with their ADHD symptoms. Let's take a look at why it's helpful. 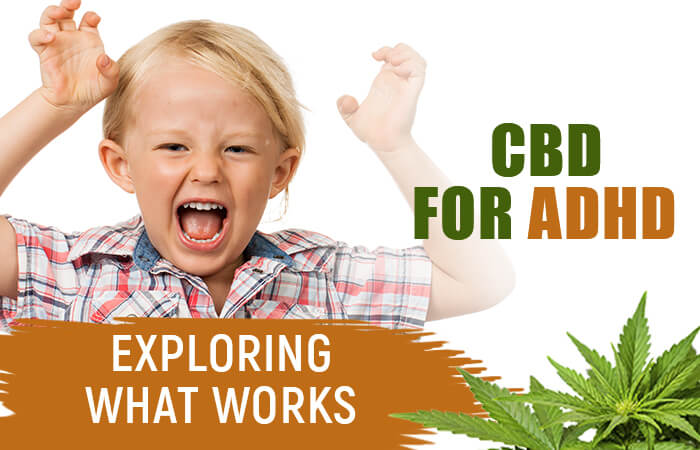 Attention Deficit Hyperactivity Disorder is an executive functioning neurodevelopmental disorder that is characterized by excessive energy. You can also have a short attention span, difficulty concentrating, and difficulty controlling behavior that is deemed inappropriate for a person’s age.

In most cases, the symptoms appear in adolescents prior to the age of twelve and often result in difficulties in school, at home and while participating in recreational activities. They are also sometimes associated with other mental disorders such as substance misuse.

Furthermore, as of 2015, an estimated 51.1 million people suffer from ADHD globally. ADHD is diagnosed approximately three times more often in boys than in girls. However, the disorder is often overlooked in girls because their symptoms differ from those of boys.

In addition, approximately 30% to 50% of the people diagnosed with ADHD during childhood continue to display symptoms into adulthood resulting in some 2% to 5% of adults experiencing the condition.

What is the Cause ADHD?

Despite the fact that ADHD is one of the most commonly studied and diagnosed adolescent mental disorders, the exact cause of ADHD is as yet unknown. However, some researchers believe that the development of ADHD is due to a mixture of genetic, environmental, and possibly even viral or bacterial factors. Certain bacteria can lead to chemical and structural imbalances in the brain.

However, research has shown that people suffering from ADHD do have specific genes that are lacking in some people which adversely affect the way the brain transmits signals. This is especially true in the parts of the brain associated with attention, reward and consequences.

According to a study published in the British Journal of Psychiatry which was performed on twins, researchers found there is a 75% chance that ADHD is genetic in nature. Researchers have determined that most of the genes believed to be associated with ADHD are also involved with the dopaminergic signaling system which is partially controlled by compounds found in the Endocannabinoid System.

Since dopamine is an organic chemical responsible for thought processes such as memory and attention span, it enables the transmission of signals between neurons in the human brain. Patients suffering from ADHD have been observed to have low dopamine levels in the Prefrontal Cortex of their brains.

Research has also shown that a significant number of patients who suffer from ADHD have noticeably thinner brain tissue in the specific areas associated with spontaneity and impulsivity.

Lastly, based on a different study, both infection and brain trauma at an early age have also been shown to have an impact on ADHD.

How Can CBD Help Patients With ADHD?

All humans have an internal system known as the Endocannabinoid System which consists of a large number of receptors. They are both the body and the brain which play a huge role in controlling crucial processes such as memory, attention, mood, appetite, and even pain. The EC helps with the bodies homeostasis.

In fact, a study conducted in Germany in 2015 examined the effect of CBD on some 28 males and 2 females ADHD patients who did not respond to standard prescription medications such as Ritalin. The majority of the subjects showed signs of improvement; especially in terms of sleep, concentration, and a reduction in hyperactivity and impulsiveness.

In addition, a study carried out in 2013 which was published in the Journal of Substance Use and Misuse found that numerous patients have successfully resorted to CBD in order to treat the impulsiveness, hyperactivity, and other symptoms associated with ADHD.

There is undeniable anecdotal, as well as clinical evidence that indicates that CBD, does have beneficial neurological properties that can help with ADHD.

CBD aka Cannabidiol is just one of 113 Cannabinoids that have so far been identified as naturally occurring compounds in the four species of the Cannabacea Cannabis (aka Marijuana) plant.

Consisting of a combination of 21 Carbon atoms, 30 Hydrogen atoms and, 2 Oxygen atoms, CBD is a molecule synthesized by the Cannabis plant. It has a shape which enables it to mate with certain endocannabinoid receptors in the human body’s endocannabinoid System.

Both the human body and the human brain are physically adapted to make use of the chemical properties of CBD. It was originally believed to have no medicinal benefits when it was first isolated in 1940.

Despite the fact that cannabidiol coexists with THC inside of the cannabis plant, CBD has no inherent psychoactive properties. This means it does not produce any of the cognitive or perceptual effects associated with THC like getting high.

However, CBD has been found to interact with a variety of different biological targets within the human body and the human brain such as cannabinoid receptors. Other neurotransmitter receptors to moderate severe pain, alleviate migraine headaches, alleviate nausea, halt epileptic seizures, and much more.

What is the Best Way to Consume CBD?

For those ADHD patients who wish to use CBD in order to alleviate their symptoms, CBD is commonly available in several different forms ranging from oils to vaporizer cartridges to infused edibles:

CBD tincture oil is the most commonly available means of consuming CBD. Cannabidiol oil is a viscous concentrate that can be consumed orally by placing one or more drops on or beneath a person’s tongue. It is the fastest acting because it absorbs into the bloodstream quicker.

Many patients find CBD oil to be unpalatable. One of the most popular methods of consuming CBD is to use a “vaporizer pen” which uses a pre-filled vaporizer cartridge to dispense the oil in the form of a heated vapor which is then inhaled by the patient. You can also use CBD vape juice to fill up your atomizer and vape it.

Vaporizer pens not only offer the user a convenient, pre-packaged means of consuming CBD. They commonly guarantee a given concentration of CBD for easily determined doses.

Therefore, vaporizer pens offer great medicinal value to those ADHD patients who wish to consume CBD in the form of a discreet and an easy-to-consume product.

Some manufactures of CBD also manufacture CBD infused food products which are called “Edibles”.For those ADHD patients who find CBD oil to be unpalatable and vaporizer pens to be unappealing, CBD infused edibles provide a viable alternative.

However, it should be noted that ingesting a CBD edible does cause a delayed effect because it takes significantly longer for the CBD to reach the patient’s blood stream due to the fact that the food product must first be digested.

Patients who choose to consume CBD edibles must plan accordingly. But, the effects of CBD infused edibles also tend to last significantly longer than vaporizing or consuming the extract orally.