CBD, or cannabidiol, is a chemical compound that forms in the cannabis plant. CBD is just one of the many cannabinoids that can be found in this plant and each of the cannabinoids is said to have certain properties that help users with a variety of things. Not only are there studies for CBD on Psoriasis, we always ask our customers what they are purchasing CBD for. We get a lot of our customers telling us they use CBD for psoriasis.

Use the guide below to better understand how CBD might be able to help with your psoriasis. 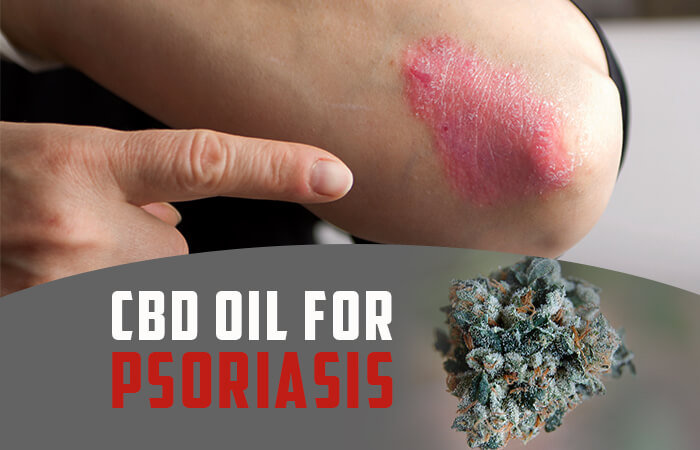 Psoriasis is a fairly common autoimmune condition that affects the skin. It results in scaly red patches of skin as well as areas of cracked skin. Those who have psoriasis have skin cells that are rapidly produced and rise to the surface without allowing the previous skin cells to fall off in time before the new ones accumulate. This creates the skin patches that are characteristic of the disease.

These types of patches will often form near or on joints such as elbows and knees but they may also form anywhere on the body including the neck, the scalp, the face. Sometimes they form in rarer parts of the body such as the nails or the area surrounding the genitals.

Psoriasis is most commonly associated with other diseases such as type 2 diabetes or heart disease. Unfortunately, there are several kinds of psoriasis. Here are some of the different types that you may be dealing with.

Plaque psoriasis is the most common form of psoriasis and it is estimated to affect around 80 percent of those who suffer from the condition. Those who have plaque psoriasis have the typical red scaling that forms from the hyperproduction of skin cells.

Guttate psoriasis is a type of psoriasis that is normally found in children and produces small pink spots that appear on the torso, the legs, and the arms. These spots are not scaly or raised like other forms of psoriasis.

Pustular psoriasis is a painful type of psoriasis commonly found in adults that causes blistering filled with pus and areas of red, inflamed skin. These symptoms will usually occur in the hands and feet but may also show up in other areas of the body.

Another painful and rare form of psoriasis, inverse psoriasis manifests as areas of bright red, inflamed and shiny skin. These patches show up in areas such as under the armpits, under the breasts, in the groin, or on the skin folds near the genitals.

Erythrodermic psoriasis is one of the rarest and most severe types of psoriasis that one can endure. Unlike other forms, erythrodermic psoriasis covers large portions of the body, making it look as though the victim is sunburned and producing large sheets of scaly skin. This form of psoriasis can result in fevers or cause illness and it is important to seek immediate medical assistance if any dangerous symptoms appear.

Besides the symptoms that are listed above, there are also several other symptoms that may appear including soreness that happens around the affected areas or itching and burning. You can also have nails that have grown thick and pitted, and joints that are painful and swollen. These symptoms will come in cycles as the affected will go through periods of flare-ups and remission.

Unfortunately, there is no cure for psoriasis but with the right medication and the avoidance of triggers such as stress and alcohol, you should be able to find some relief from the symptoms.

How It Affects Your Mental Health

Although psoriasis is a condition that affects your skin, it also affects your mental health. There are two reasons for this. The first is that the skin condition can be unsightly, leading to the person with the condition feeling embarrassed about their skin and becoming anxious about people seeing it or becoming depressed about having it.

The second reason is due to the effects of the disease. Psoriasis can be very painful at times and those who have to deal with constant pain will often end up developing depression as well. Psoriasis is also said to cause depression because it releases a cytokine known as TNF-alpha that may affect brain chemicals responsible for regulating mood levels.

How CBD Can Help With Psoriasis

CBD is still a substance that is in the process of being researched and there is no definitive evidence about whether or not CBD can make a true difference. However, there are plenty of users and customers of ours who swear by CBD to help them cope with their psoriasis. Here are some of the benefits that they have said they have experienced when taking CBD for Psoriasis.

One of the more popular benefits of CBD users is the anti-inflammatory properties of the substance. As we stated above, the area around the raised skin can become swollen and painful and joints may be affected by the condition as well. Some have stated that CBD has helped to decrease the inflammation that occurs in the affected area and in the joints so that there is not as much swelling as is normally experienced.

Besides inflammation, CBD is said to tackle the underlying pain that often accompanies inflammation. Psoriasis can be a very painful condition, depending on the severity of the symptoms. This pain makes it harder for the individual to function normally and contributes to poor mental health. Using CBD, you may be able to lessen the pain levels you feel when your condition flares up.

There is a system inside of the body known as the endocannabinoid system. This system produces internal cannabinoids known as endocannabinoids that attach to the receptors to regulate all of the body’s processes. When the system is thrown off track by a condition such as psoriasis, it cannot properly regulate certain parts, in this case, would be skin production.

Pain and inflammation are often accompanied by another uncomfortable symptom, itching. Itching can make the problem worse as you may end up scratching off skin and cause further pain and bleeding. CBD may be able to help you reduce the itching so that you can keep the condition from becoming more problematic.

How to Consume It for the Most Efficiency

Like THC, CBD is a versatile substance when it comes to the many ways it can be taken or consumed. For those suffering from psoriasis, here are some of the most beneficial forms that CBD can be consumed.

Those who deal with localized symptoms that only target specific areas of the body may benefit most from topical creams. CBD topical creams contain cannabidiol as well as other ingredients cannabinoids and terpenes. When these creams are applied to the affected areas, the active ingredients are absorbed into the skin.

Tincture oils are drops that are taken orally and work for those who experience widespread symptoms that affect large amounts of the body such as the joints. Tincture oils are absorbed much easier into the system and act fast, which is great for those who suffer from a lot of pain due to their condition. With tincture oils, you will also be better able to keep track of your dose so that you know exactly how much you are taking each time.

Psoriasis is a painful, unsightly condition that can affect all aspects of your health. It is important to act fast in order to help so that they do not spiral out of control and impact your quality of life.