The Benefits of CBD Oil for Skin

Most people are not aware of the fact that the skin that covers their bodies is the largest organ the human body has and that it serves several different purposes. For instance, because the average adult body consists of 50 to 65 percent water, our skin serves to both retain and regulate our body’s moisture content which, in turn, both insulates our body and regulates our core temperature. Plus, our skin also serves as an agent to absorb and store vital nutrients such as Vitamin D, Vitamin B, and Oxygen. 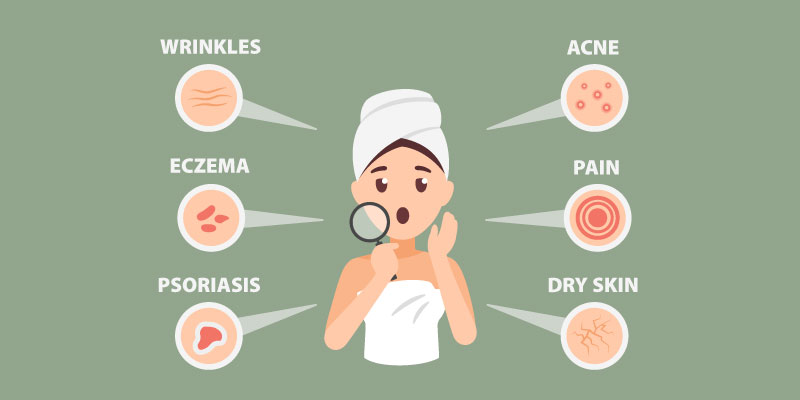 However, the human body also contains an Endocannabinoid System which is  is a biological system composed of endocannabinoids which are responsible for regulating a variety of physiological and cognitive processes such as fertility, pregnancy, pre-natal and post-natal development, appetite, pain suppression, mood, and memory as well as mediating the pharmacological effects of cannabis.

Consequently, CBD (aka Cannabidiol) may very well prove to be a viable alternative for treating specific several different skin conditions. However, while ingesting one or more of the various CBD products available on the market today can be an effective way to receive the benefits of CBD without experiencing the altered perception (aka “high”) of typical cannabis products, applying CBD oil topically is the best means of treating skin conditions.

In fact, CBD has been proven to relieve many common skin conditions such as inflammation, itching and burning and, bug bites as well as aiding in healing abrasions, cuts and, infections.

HOW DOES CBD OIL BENEFIT YOUR SKIN?

Because the human body naturally creates cannabinoids via its Endocannabinoid System, it is naturally predisposed to making use of the cannabinoids contained in CBD oil. Thus, human skin can actually benefit from the application of CBD oil in a number of different ways.

For instance, because human skin has cannabinoid receptors located throughout its dermis and epidermis, the cannabinoid contained in CBD oil has the capability of interacting with those receptors to encourage homeostasis and healing. Thus, a number of studies have shown that CBD oil can help treat a wide range of skin conditions such as dry skin, rashes, eczema, acne and, even skin cancer.

Furthermore, CBD is also a powerful antioxidant and thus, it serves to protect skin from the harmful effects of free radicals such as ultraviolet light, smoke and, environmental pollutants. Therefore, CBD oil can also help to prevent the formation of wrinkles and fine lines and thus, the appearence of aging on human skin.

Why is CBD Good for the Skin?

CBD oil also contains a wide array of essential nutrients such as vitamins, minerals, proteins and, fatty acids which all serve to encourage skin heath as well as supporting skin cell growth while moderating oil production to aid in keeping skin soft and supple.

In fact, ingesting CBD oil orally as well as applying CBD oil topically to your skin not only moisturizes it while also moderating the appearance of aging skin, CBD also aid in soothing inflammation to alleviate the symptoms of both acne and eczema.

One of the main benefits of topically applying CBD oil to your skin is that CBD Oil contains an Omega-6 Fatty Acid called Gamma-Linolenic Acid (GLA) which is a moisturizing compound. Therefore, CBD has the ability to regulate the moisture content of human skin.

Consequently, CBD oil as well as both lotions and creams that have been infused with CBD, make an excellent skin moisturizer. In turn, CBD can help to alleviate skin conditions such as eczema and some forms of psoriasis by both moisturizing and nourishing the skin.

In addition to its moisturizing properties, CBD oil also has powerful antioxidant properties which are critical to protecting skin from free radicals like UV rays, smoke, and environmental pollutants and thus, antioxidants are critical to decreasing the visible signs of aging skin.

Therefore, by moisturizing skin and counteracting the damage caused by free radicals, CBD anti-aging creams and lotions can help to diminish the visible signs of aging such as wrinkles, skin dullness, and ruddy skin tone.

In fact, a study conducted in 2010 and published in the Journal of Investigative Dermatology revealed that the Endocannabinoid System is critical to the life cycle of Basal Cells which make up approximately 90% of the cells in the Epidermis.

Therefore, because healthy skin depends on the body’s ability to grow new cells and discard dead ones, using CBD oil to manipulate the Endocannabinoid System can help regulate the life cycle of cells for more radiant, youthful looking, skin.

Inflammation is an important function of the human body because its primary purpose is to protect cells and initiate tissue repair. However, a human body’s response to inflammation can range from inconvenient to excruciating.

Fortunately, CBD has powerful anti-inflammatory and immunosuppressive qualities and thus, it can have a drastic effect in reducing inflammation while also encouraging skin growth and new cell generation.

Furthermore, the two main endocannabinoid receptors in the human nervous system are called CB1 and CB2. But, because the CB2 receptor affects the human immune system, CBD has a greater impact on the CB2 receptor.

In fact, one study related to CBD and inflammation indicated that it is an even stronger anti-inflammatory option than Omega-3, vitamin C, and various antioxidants. Thus, while there are several compounds within cannabis that help to reduce inflammation, CBD is arguably the most effective.

In addition, recent studies also show that CBD has the potential to decrease excessive oil production in human skin as well as helping to offset other triggers of acne by inhibiting skin cells’ lipid production. Therefore, CBD can be a very effective natural treatment for acne.

On the other hand, some prescription acne medications may be too potent for sensitive skin and thus cause additional damage to some user’s skin while, other topical medications may not be suitable for the type of acne you have.

However, some people have found that when they apply CBD products such as CBD oil or soap that contains CBD oil to their skin, the first benefit they notice is a decrease in the harsh appearance and size of a blemish. In addition, inflammation of the area also decreases and thus, it allows skin to return to its original state without the potential for scarring.

The word “eczema” (meaning “to boil over”) originates from the Greek language and is used as a blanket term to describe several different types of inflammatory skin conditions.

In addition, many researchers believe that one of the reasons people develop eczema is due a type of allergic response caused by an imbalance in the Endocannabinoid System. Consequently, the fact that both nerve fibers and human skin contain both CB1 and CB2 receptors may be the reason why CBD aids in reducing skin inflammation and thus, the symptoms of eczema.

Furthermore, CBD oil contains both Omega-3 and Omega-6 fatty acids and, consuming these nutrients can also help to treat skin conditions like eczema.

How to Use CBD for your Skin

For those who choose to use CBD to treat inflammatory skin conditions such as acne or eczema or, as an anti-aging agent to help their skin keep its youthful appearance, there are two options:

The first method for treating skin conditions with CBD is to apply CBD oil directly to your skin which works very well if you have acne blemishes, patches of dry, irritated, skin or, eczema that you would like to soothe quickly.

Thus, in this case, you should either apply CBD oil directly to your skin or, you can apply a lotion or cream that has been infused with CBD oil which causes its effects to be felt almost immediately.

On the other hand, a person can choose to ingest CBD oil directly or, to consume one of the many edible products available today which have been infused with CBD oil.

However, ingesting CBD products orally does cause a delayed reaction because it takes more time for the CBD to enter a person’s blood stream and thus, the beneficial effects of ingesting CBD orally can take as much as two hours to be felt.

So, due to the ability of CBD to regulate moisture in the skin as well as its anti-oxidant properties, CBD has proven to be effective treatment for restoring the youthful appearance of human skin.

In addition, also due to its ability to moisturize skin and moderate oil production in addition to its anti-inflammatory properties, CBD oil and, products that have been infused with CBD oil, have proven to be effective treatments for dry and/or irritated skin as well as for treating inflammatory skin conditions such as acne and eczema.

Thus, regardless of whether it is applied topically or ingested orally, CBD oil provides numerous benefits for skin health which many people can take advantage of since CBD oil is considered safe for use by the majority of people.

Consequently, CBD provides its users with a safe, natural, alternative to prescription medications and harsh chemicals to alleviate inflammatory skin conditions as well as to moisturize skin and restore its youthful appearance.